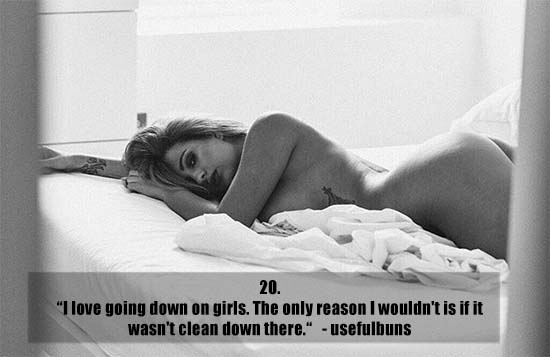 2. “I can either love it or hate it depending on the the taste, smell or look your vulva. Yes, the last part is shallow but that’s how it is: if you have a pretty pussy I’ll want to eat it for hours, if not I’ll want to get over with it ASAP.” — n0ggy

4. “I don’t always refuse to go down on girls. Just certain girls…. And yeah, it’s the smell. Not every girl smells/tastes good. I’m not accusing them of being unclean or anything. I think it’s just hormones, diet, or similar. Still, if my finger smells nasty after I’ve fingered you for a bit, I will NOT be going down on you.” — Inigo93

5. “Frankly, I smelled urine. I didn’t like that smell. I am honestly wondering if that is a common occurrence. Is it? Because I would like to try it again if this is something that is extremely rare.” — Unknown

6. “I didn’t go down on my last EX. I didn’t ask for blow jobs either, she offered (honest). HOWEVER, I was totally cool with going down on her but the smell… oh god the smell… she wasn’t a dirty girl (tee hee) but for some reason, it was really bad down there. maybe I’m a just a pussy. whatever.” — IronChefJesus

7. “Too much hair can be a deal breaker. I like the smell of clean vagina just fine, but if there’s a bush it turns the smell awful, and more potent. Strong smells strip me of my power.” — Qui-Gon_Wolfkiller

9. “Some people did a study and it showed that 1 out of 3 girls have crabs where I live. Meaning if I go down on a girl I’m either gettin’ the seafood special or a face full vag.” — Calphoba

11. “Because my neck gets really sore. I don’t refuse entirely but after the third time or so it loses the novelty so i’d really prefer for her to straddle my face, but to hell with these chicks who won’t accommodate me that way.” — gabbagool

12. “I won’t go down on a girl with pubic hair. It just grosses me out. Otherwise, I love eating pussy.” — revjeremyduncan

13. “Going down on girls with HPV can give you throat cancer. HPV is one of the most common STD’s, and is usually asymptomatic.” — Unknown

14. “I’ve never done it because I know if I don’t like it I will immediately stop. Never tasted it so I imagine it’s an odd flavor.” — Volraith

15. “It smells, and tastes bad. Women like performing oral sex, men generally don’t. Everything doesn’t have to be the same between the sexes.” — Cithlu_Bob

17. “Let me put it this way; would you put your face on a vagina? They bleed sometimes and are generally messy, creating their own lube and all. Try oral on a girl and you’ll know what I mean. I’ve only done oral for one girl and that’s because she’s “the one” and I know her junk is clean. Maybe guys are particular about what goes into their mouths but comparatively, dicks are much less messy and gross to have in your mouth.” — noman2561

18. “If anyone here actually wants to hear a reason why without instantly losing their shit, it’s pretty simple: I just think vaginas are weird looking. They just look kind of unsettling to me. It’s not that I won’t do it, it’s just that I prefer not to. I’d much rather just have sex.” — enthos

20. “I love going down on girls. The only reason I wouldn’t is if it wasn’t clean down there.“ – usefulbuns